Bringing the World Back Home: 50 Years With the Peace Corps

Bringing the World Back Home: 50 Years With the Peace Corps

In 2011, Peace Corps celebrated 50 years since the first volunteers were sent to Ghana, Tanzania, and the Philippines. RPCVs of Madison organized public events to draw attention to the work of Peace Corps. The key event was an art exhibit, “Bringing the World Back Home: 50 Years with the Peace Corps.” 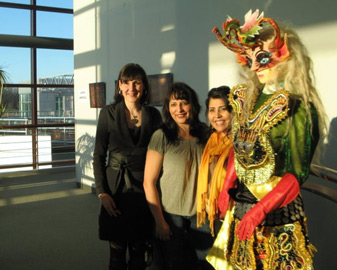 Madison around the World Art Show – 2011

Bringing the World Back Home recognized Wisconsin Peace Corps volunteers whose 50 years of service affected thousands of lives in various parts of the world. This exhibition was a concrete way for returned volunteers in Dane County to share their experience. The art objects provided windows into their memories and experiences with their overseas communities, and honored the people who welcomed them so warmly into their homes. In turn, the volunteers have been equally impacted by the cultures in which they found themselves. Most say “I gained so much more than I gave.” Returning home, they often brought artifacts with them, reminders of where they had been, of the people they had stayed with, and of the time they had shared.

These objects, in turn, carry information, providing a window into history. If each could speak, it would tell of its maker, culture, context, and materials. Some represent spiritual entities or sacred text. Some carry information about an exchange of ideas on a global level. Indigenous artisans once produced solely for local consumption, and some works in this exhibit reflect that focus. Increasingly, however, artists produce locally for an international market. Thus, cross-cultural influences are visible in many of the pieces displayed in this exhibition.

The goal of this exhibit was to present visual material to expand cultural understanding and appreciation of both the differences and the commonality of our human condition. Carvings from Africa, textiles, pottery from Central and South America, and basketry from the Pacific Islands were included. Captions accompanied each object, explaining what it was and where it was made. Statements by former volunteers were included, telling of how they were affected and changed by their time in the Peace Corps, and how they brought that change back home with them. A catalog for the exhibition records both the art and the memories.

The primary venue was the Promega Corporation Art Showcase, with an opening on March 24, 4:30-6pm, and continuous display through May 2011.

The exhibit was supported by and in partnership with the UW African Studies Department, also celebrating their 50th anniversary in 2011-2012. The intent was to honor 50 years of volunteer service and assess the impacts of the Peace Corps in Africa and beyond. The Peace Corps and Africa conference was held from March 24-26, 2011, and included African dance and movement, Peace Corps memories, and Peace Corps information tables. A concluding series of events planned by the department, Fifty Forward: A Half-Century of African Studies at Wisconsin, was held April 20-22, 2012. 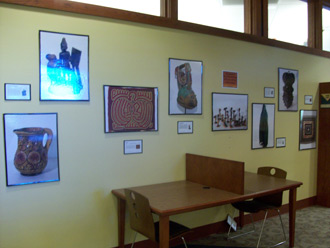 Display at the Teen Reading Area at Verona Public Library

Members of the RPCVs of Madison were present at these event openings, and are also available for other speaking requests in the community. Contact the President to inquire about speaker availability.

March 5, 2011 – In collaboration with the Peace Corps UW Campus Recruiter, we held a Global House Party at the Overture Center’s International Festival. Short presentations on Peace Corps service in countries around the world were offered, and visitors were invited to linger for conversation over a cup of tea (Peace or Harmony tea) or coffee (offered by the Fair Trade Coffeehouse).

March 24-26, 2011 – Participated in the UW African Studies Program, “Peace Corps and Africa.” This conference featured presentations by RPCV writers, poets and film makers; former US Ambassadors; Johnnie Carson, the US Assistant Secretary of State for African Affairs; John Lange of the Bill and Melinda Gates Foundation’s Global Health Program; and more. The conference culminated in a public presentation featuring Aaron Williams, the Director of Peace Corps, followed by the Ultimate Peace Corps Dance Party in the Great Hall of the Memorial Union.

March 27, 2011 – In collaboration with the Regional Peace Corps office in Chicago and the National Peace Corps Association, held an “Around the World Expo” at the Monona Terrace. This was one of a series of 50th Anniversary Expos being held around the country in 2011. The expo highlighted the work of the Peace Corps over the past 50 years, while engaging RPCVs and inspiring the next generation of Volunteers. It was free and open to the public.