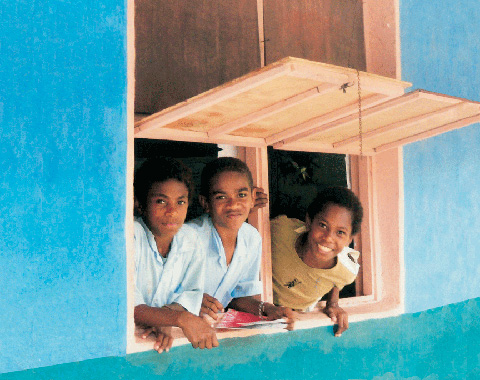 Children delight in attending school in Vanuatu, an island nation of 200,000 in the South Pacific. The country struggles to preserve its rich cultural heritage and natural treasures, while simultaneously striving to advance economically and socially. It is understood that a child’s education is one of the keys to development, yet many subsistence farm families struggle to pay their children’s school fees. Here in the seaside village of Ekipe, three boys peek out of the new classroom the community has built to replace the old school of coconut and pandanus leaves. The new building offers a cool, quiet place where children can learn, and stands as a testament to the progress of the village.
– Kristine Alaniz ©2008
Peace Corps Volunteer, Vanuatu 2007-09
Health

Republic of Vanuatu/Ripablik blong Vanuatu
In Oceania, a group of 82 islands of volcanic origin in the South Pacific Ocean, about three-quarters of the way from Hawaii to Australia. 12,189 km2 (slightly > CT), 2% arable.

Getting Stoned with Savages: A Trip Through the Islands of Fiji and Vanuatu
by J. Maarten Troost

Book Description
A comical and touching travel memoir with a sentimental heart, Troost's latest work genuinely captures the search for paradise as well as the need for home.